K, so, part III occurred over a week ago, so I want to get it down while it’s fresh in my head. The evening started with a 750 pt series that I missed. Once again, there were a few locations to choose from; everybody choosing a particular location battled for it. I missed that battle, as my son’s bedtime is around 7-730, so I can never get out there before 8. The second event of the evening, however was a zombie holdout! pretty sweet. tau, dark angels, imperial guard, and the unyielding (space marines) had to defend a civilian escape ship for 5 turns against the combined forces of our daemon player’s army and two ever-swelling hordes of zombie doom.

Here we are, ready to stand our ground. My forces are in the close left (5 man tactical squad, heavy bolter devastators, scouts, and a terminator assault squad lead by a chaplain). Realised about 30 seconds into the first turn that I should have put the devastators in the upper roof to give them 360 degrees of awesome.

The hordes each grew at a rate of 5-30 zombies per turn, and each horde counted as a single unit for the purpose of close combat. They dealt glances on 6’s, had a 6+ invulnerable coupled with a 5+ feel no pain, and were generally just nasty enough to make things pretty interesting.

The initial setup at the beginning of turn 1 (defenders would go first).

The chaos daemons were the big threat in the early game; zombies grew more threatening as time wore on, as their ‘reinforcements’ always arrived off their own flank, not at the table edge (if the nearest zombie in the horde was 6 inches away, reinforcements could spawn 6 inches away). Order won the day, but it was close, eventually coming down to a wall of rhino wrecks on the one side and my entire force locked in close combat on the other.

At the beginning of their second turn, I think. I managed to cut down a tonne of zombies every turn, but not enough to keep their ranks from swelling. 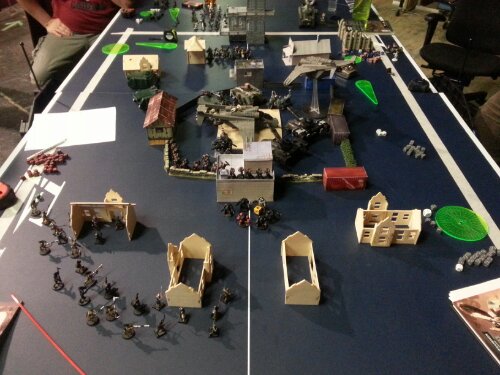 The last photo I took. We were about to bask the game, but decided to fill the zombie movement, Just to see if they were indeed doomed. They instead closed with my terminators and I spent the rest of the game killing zombies in close combat.
It’s very rare for me to take devastators into assault, but it was the only way I could continue to destroy enough zombies each turn.

Experience-based rewards? My heavy bolter devastators are now relentless, for starters. Sweet. Oh, and apparently my arguments were sound, there will now be a die roll for absent players to see whether they get any upgrades or advancements when away. They still take the losses, but won’t be quite so crippled going into the next round.