Last night I fought my fourth warhammer fantasy battle (more on that later), so I used my little guy’s nap time to repair and prep some of my models. My friend got himself a zombie dragon, so we decided to go big so he could try it out. 2500pts each in a three player scenario, high elves vs skaven vs vampire counts. 2500pts many I had to proxy a few units (mostly just bulking the units up; I only had to build one from scratch and that’s because it’s still in the mail, but because I don’t own it).
The main items in the list were re-repairing an old rat ogre and my screaming bell. I’d repaired both before, but they’re both metal, heavy, and keep falling apart at the slightest provocation.
Rat ogre first. Decided it was time to try pinning something. Thus far I’ve always been able to get away with just glue in metal models, but the rat ogre just wasn’t holding together in a permanent way. Being a super-expert modeler with plenty of professional type gear *cough*, I managed to dig up a 1/16 drill bit and some wire of about the appropriate gauge. 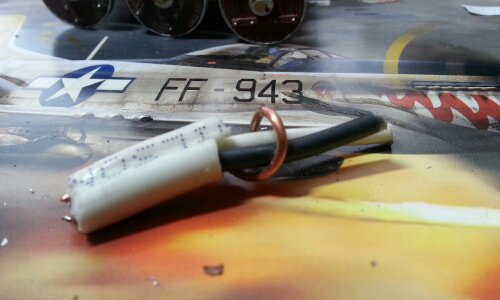 Yep. Like the stuff you’ve probably got running through parts of your house. Grin.
I put a thick but small dot of wet paint on the rat ogre’s lower half and placed the upper half where I wanted it. The paint transferred and I now knew where to drill my holes. Next I used my fingers and the bit to drill out the holes (I can see why people invest in small drills and/or bit holders) and cut an appropriate length of wire. Superglued it into one piece, and then into the other. Tada! One significantly sturdier rat ogre: 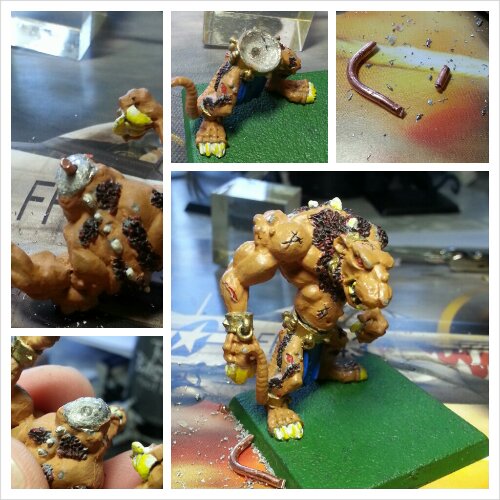 The screaming bell was next on my list. I used a blade to cut away a bunch of old superglue, and this time glued the bell into place as well. It won’t swing now, but it never had the room to swing very well anyway, so it’s not much of a loss, there. I also added a pin to the grey seer, as the original had been filed off by the previous owner; mr grey seer should now stand solidly atop the cart: 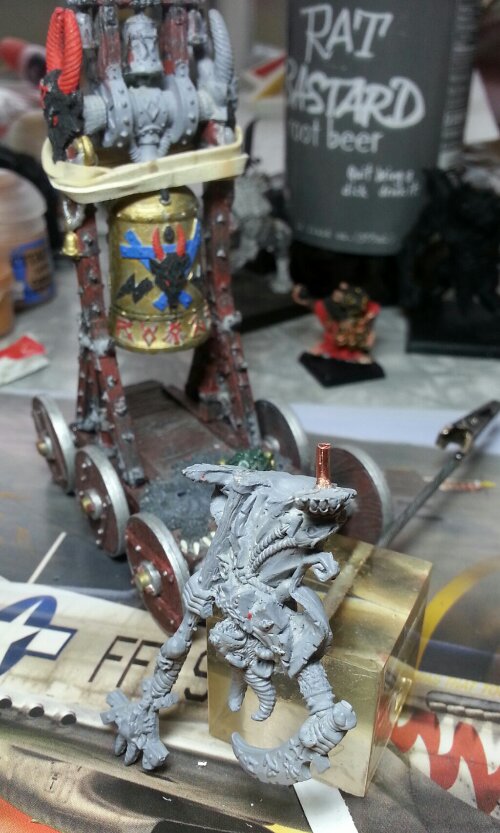 Looks like you can see the afternoon’s other project in the background of that last shot. I more or less finished painting my poisoned wind bombadier. 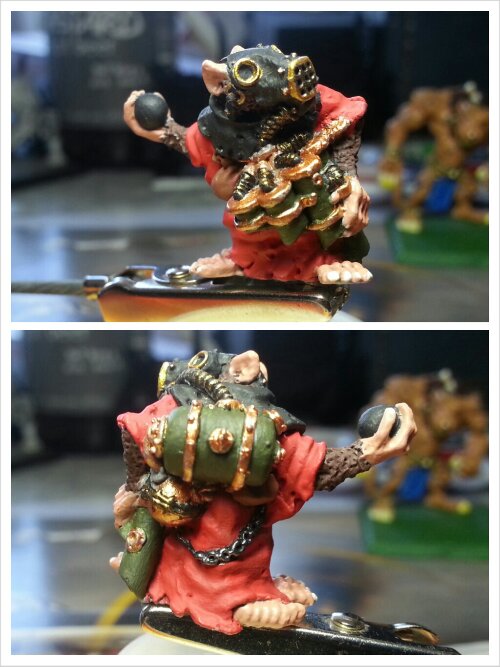 No highlights or anything yet, I think I might try doing that stuff after putting a wash on it. For now, though, I consider him painted. I decided to make him the bombadier because he’s my odd model out – all my other globadiers are the newer versions – and I figured that would make him stand out. Rather hilariously, though, when I fielded him last night it became all too clear that 40k terminators aren’t the only gw model to suffer from scale creep. 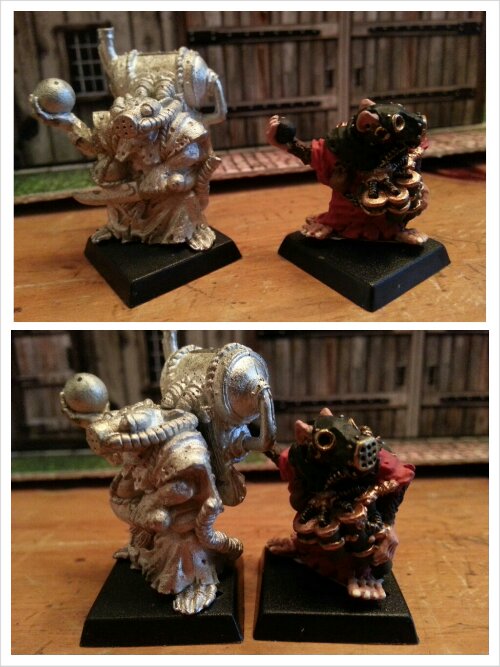 The height is actually fairly close, but that seems to be mostly the result of the new models being a bit more hunched; everything about them is significantly bigger.

I did say I’d mention the actual battle, so here goes. I do not have the models to field 2500pts with any synergy. Mostly I had a bunch of units running around doing their own thing. Some stuff went well, some didn’t, and the scenario out me in the middle between the other two armies. It was rough going from the beginning. 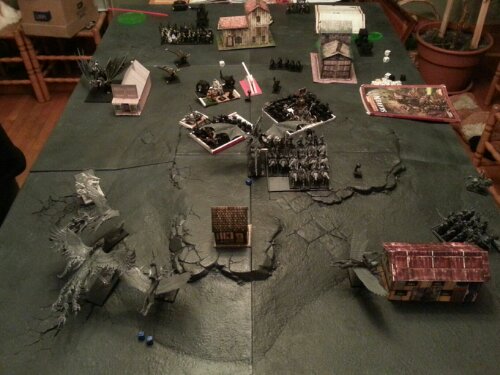 This is after the first turn. I’m the last stand style clump in the middle, if you ignore the Elven cavalry and the dragon that have already successfully charged my poor globadiers.
All things considered, though, could have gone way worse. We played to the end of turn 4, and I still had a couple units left. The screaming bell disappointed me big time, although it’s unbreakable nature was very helpful. I can see using it again, but it wouldn’t be a given. The warp lightning cannon destroyed itself, but not before impressing me, and I’m thinking I might need a couple more of those. 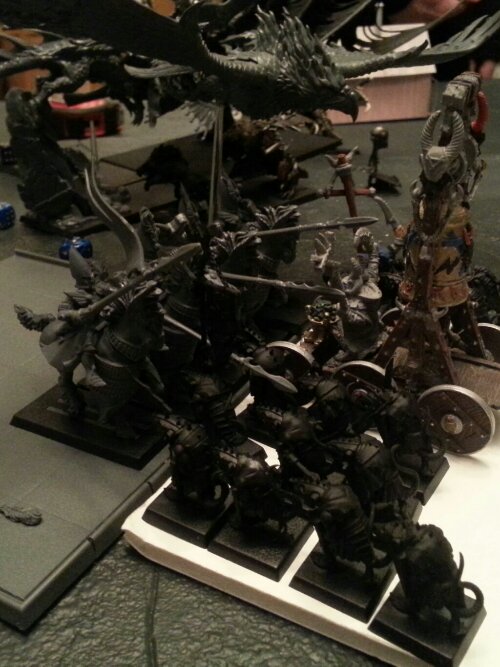 Really, it was my bad luck to be stuck in the middle, I really had neither the army nor the experience to turn that too my favour, but we had a lot of fun. I also really need to keep my skaven a little closer together, our at least be aware of their leadership bonuses, because I lost almost every unit to breaking.

Not the globadiers, though. Between the cavalry and the dragon, they we’re wiped out fighting to the last rat.