40k this weekend was 1500pts per player, 2x dark angels vs 2x space marines (iron hands and the unyielding). Dark Angels were mostly bikes, and they closed in the first turn, wreaking havoc on our line of tanks. 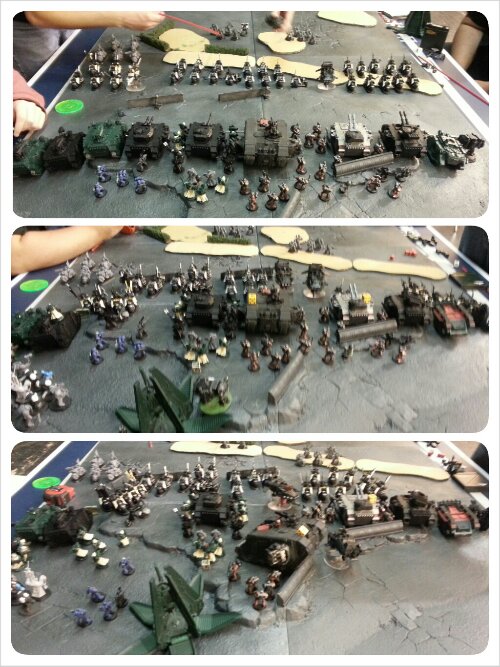 My plasma devastators were largely cut down in that initial attack, leaving the unit with only 2 plasma cannons to return fire. By the second turn only one remained, having survived unscathed as a hail of plasma and gunfire vaporized his comrade. At this point I decided he was going to get a name, and then he proceeded to vaporize another bike, and continued to do so for several more turns!

At one point totally surrounded by the enemy, he ducked behind the wreck of an Unyielding predator annihilator, and got right back to raining plasma death upon his enemies.

He was finally brought down in the fifth turn, and I grabbed a pencil so I could mark him for later naming. I flipped him over, and…

That’s right! Henriksen is back!
And in brilliant form again. I’ll have to give him a purity seal or something.

The other real standout individual was chronus. Faced with a veritable wall of melta from turn 1 on, he kept his land raider crusader in action right to the bitter end. Having lost a multimelta, both hurricane bolters, and 6 (!) hull points, he managed to cut down the last of the melta bikers before losing his seventh hull point to dark angel terminator attacks. He almost never missed with anything, healed 3 hull points with It Will Not Die, and fired all available weapons every turn of the game.
I liked him before; but now that he’s been updated I’ll never have to defend the choice again. At 50pts, chronus was a steal. As amazing as Henriksen’s performance was, I think MVP goes to chronus this time.