Did some more Ariadna assembly the last couple evenings, including a highlander cateran that arrived this evening. 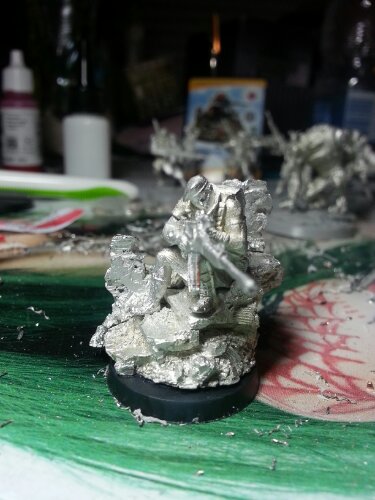 I opted to use only 1 wall piece, in order to keep it on a 25mm base. The wall hangs off the base a fair bit, but I think it’s within reason. A fair compromise between the regulation 25mm base and the much more display-oriented 40mm layout.
Looks like we’ll be trying a 150pt skirmish on Sunday, so I’ve been bouncing a variety of list options around. With the arrival of my cateran and the confirmation that my Haqqislam opponent (this will be a multiplayer skirmish, but he’s likely to be 30-50% of my opposition) will be fielding a fairly elite 4-model force, I’m not going to worry about putting too few units on the board and we’ll be fielding a fairly small list myself:

That’s:
mirage team 5,
the cateran t2 sniper,
covert Uxia,
a 112th emergency services doctor,
and a kazak lieutenant.
We’ll see how they do. This could be a disaster… I also finished building my t2 mormaer, and a second Caledonian volunteer, but I seem to have misplaced the photo I took of them. The mormaer is visible in the background of the alpha force image.