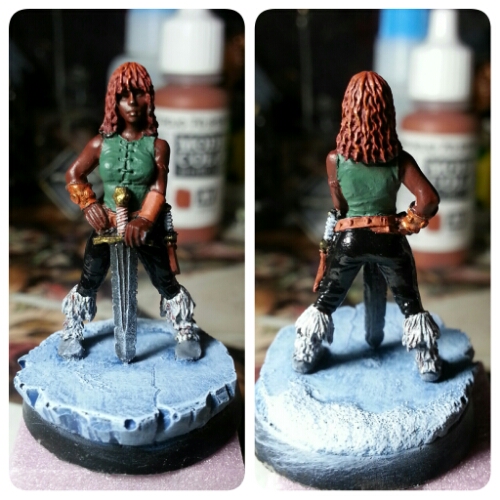 Miniature: Zetta from Hasslefree.
Backstory: Xaalia joined the local government’s standing army at an early age; as an only child, she needed to help support her ailing mother. Demonstrating certain useful talents, she was singled out before long and placed into a scouting regiment.
When civil unrest a few years later resulted in the disbanding of the local army, Xaalia went solo, running dungeons and cave systems. By the time the Felstad thaw began, she had built a fair reputation in the local area, and was able to gather a small crew. Rikkits and Jaeger crewed with her for a while, exploring the outskirts of Felstad and doing pretty well for themselves as a trio.
As news of the thaw spread, competition amongst the adventurers looting Felstad got steeper, and Xaalia’s trio found themselves at greater and greater risk. Ancient traps, wandering beasts, and even the undead were challenges they could handle easily. Powerful wizards leading entire warbands were a little much.
When Rikkits informed Xaalia that he’d been approached by a wizard’s apprentice about putting together a sizable crew, she saw the offer for the opportunity it was… more treasure, safety in numbers, and a wizard or two to handle the big problems.