One of my Infinity friends has joined us for Frostgrave! He tried a few games with a mutual friend of ours that I’d told about the game, but then Operation Flamestrike happened to Infinity, and I guess they haven’t played anything else since.

She and the Headtakers return (without Jaeger, who is sitting out injured)

I brought the Headtakers and he brought a fresh Necromancer warband that he built and then levelled up using a ‘game simulator’ that I put together for using when any of us miss a game. He ran through it four times to replace the four games we’ve all played; it seems to work okay so far. The Brass Knuckles and Chris’ Crew were both unavailable so we opted to ignore this game as far as the campaign goes and just play for kicks (and to get him a better feel for the game).

We tried out the ‘Magnetic Force’ scenario, and it was very cruel to our archers.

On the bright side, weak archers and wizards led to a few opportunities to try out multiple combats; the one pictured above chewed up about a third to a half of the soldiers on the board. 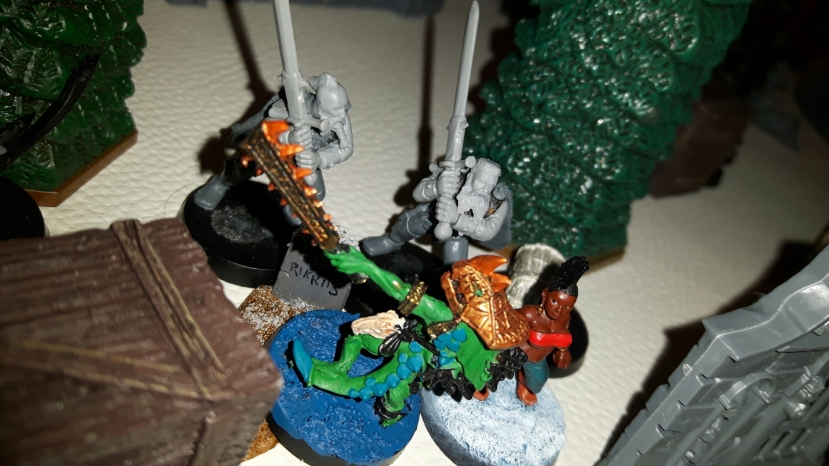 Fun terrain fact: the grave they are fighting on top of belongs to Rikkits the thief, a dead Headtaker. That’s right, I made up graves for my dead. You’ll also note in the group photo that I’m mostly done my dragon skeleton.
No detailed casualty list this time, as we didn’t fully process it, but lots of soldiers down. About 6-7 down on each side.