Well, last weekend was the Academy Awards, which of course means M went across the road for her friend’s Oscar party, and I sat down at home with a bunch of Science Fiction movies I hadn’t seen (generally because they were before my time). This year I started with Time After Time, and it was delightful!

Look at that font! That name! That blue smoke! I can already tell this is going to be good…

This one’s been on my list for years, but kept getting pushed aside up make way for other movies. I’m super glad I finally at down and watched it. HG Wells (Malcolm McDowell) chases Jack the Ripper (David Warner) through time and space to 1970s San Francisco, and meets a lovely and independent young lady (Mary Steenburgen). Madcap adventure, romance, and comedy ensue. Wells is charming and wonderfully naive, Jack is cruel and confident, you get the idea. I totally recommend this.
It was so good that I decided I could go high risk with my next selection, and that is how I found myself watching Metalstorm: the Destruction of Jared-Syn. 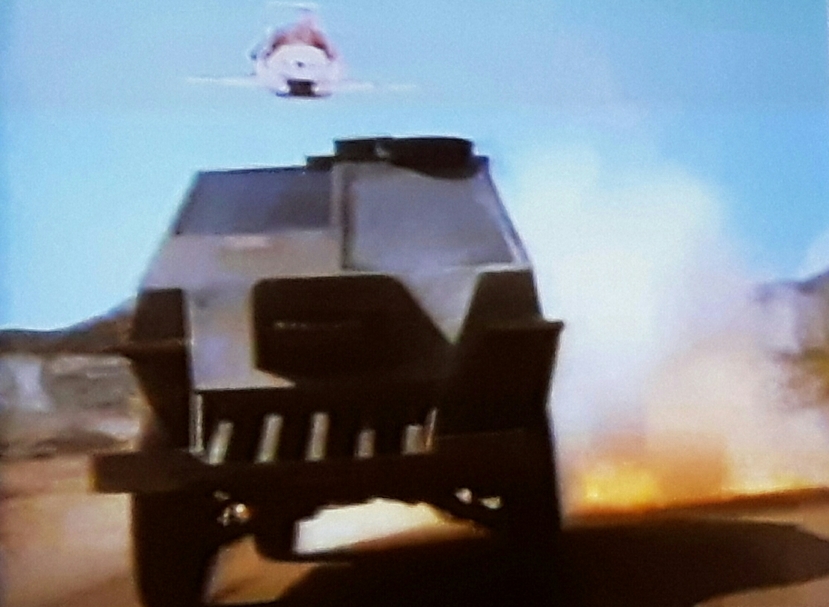 3d, PG, 1983. I almost feel like that’s saying enough. This is one of those post-apocalyptic road rage movies that were so prevalent in the wake of Mad Max. Mostly they just make you realize what a genius George Miller was/is. Everything feels slow and unimpressive, the vehicles look lame, you get the idea. Maybe that’s more accurate though… What are the odds that everybody working on a car after the apocalypse is some sort of monster garage hero? This one isn’t what I’d call actively bad, it’s just not at all good. The bad guy is filling a giant crystal with stolen souls, the good guy always leaves his helmet in the tank-car, there’s a girl and a scoundrel and an honorable subvillain. It checks all the boxes, but does so with a crayon.

The final movie in this 2017 Oscar trifecta was The Adventures of Buckaroo Banzai Across the 8th Dimension, and what a closer! Buckaroo Banzai (Peter Weller) is a rockstar/scientist (and brain surgeon?) who uses a rocket car and a black box to punch a dimensional home through a mountain, inspiring an interdimensional alien exiled/trapped on Earth to rally his War of the Worlds compatriots and steal the black box, triggering an interdimensional incident that could result in global thermonuclear war. Along the way we meet Buckaroo’s fan club slash militia, a romantic interest that seems to be the long lost twin of hours ex-wife, and a series of ever-less useful bureaucrats and aliens. I definitely enjoyed it, but I think I mostly just love that it exists; it was a very different era for truly creative endeavours.

That’s it for now. I’ve gotta say, I’m truly excited to see what I dig up for next year.