With the foul winter behind them, the dark forces rising in former Kristanz rushed to expand their empires.

The goblins of da Squig Teef tribe discovered a Wizard’s Tower in the northwestern Gobbolands, and approached it with visions of glory. Unfortunately, the wizard occupying the tower did not take kindly to being interrupted by goblins, and challenged the force’s shaman to a duel. The wizard was far more powerful than the ambitious goblin realised, and the shaman – masterful as his minions considered him – was summarily slain. Elsewhere in the realm, da Squig Teef goblins expanded the Gobbolands to the southeast, and marched upon two villages in the west, both of which submitted easily to their rule.

The Upirian Vampires, having plenty of room to breathe on the former Kristanz’s southern peninsula, set out to expand their territory with little concern for the other realms. Their scouting parties were largely successful, discovering a city – Thorns – and a village – Lachrymarum. One undead scouting unit heading east did manage to get confused, reporting back after a day’s reconnaissance with precise details describing the location and nature of Upiria’s own Bloodstone, a fortress in the realm’s southwest region.

Clan Spearhavok , upon witnessing the tribe of da Squig Teef advancing upon them from the east, sent night runners into one of da Squig Teef’s newly conquered villages and managed to gather detailed information regarding the enemy’s banner. The battle that followed was quick and vicious, with the Grey Seer Blisterfur leading his fellow rats to a glorious slaughter. Rat Ogres tore into a regiment of goblins while the hell pit abomination made short work of a unit of squig hoppers and moved on to tear through some trolls. The dreaded 13th spell was unleashed on a second goblin regiment, reducing much of the regiment to twisted corpses. The goblins hadn’t even the time to name the village before it was ripped from them and rechristened Goblintombs. Elsewhere in the realm, Clan Spearhavok discovered 2 more villages and an independent city state of Khorne. The first two submitted easily, but the Khorne city was a close battle. Fortunately, casualties were fairly low, and the remaining skaven settled in to await new orders in the city now known as Khorne’s End.

The Black Skull Empire arrived late to the party and started off small, exploring the Blight to the northeast and discovering that it houses innumerable bands of brigands! The banner’s baggage was lost, but no casualties were suffered, and a dangerous threat is now well known to chaos. A village was discovered to the southeast and named Desperation, while a second unit of scouts fell ill, failing to learn anything useful and losing a couple of scouts to the strange sickness. A barren chasm was found to the southwest.

Finally, the Ogre Kingdom of Ogredeblarg did some scouting and found a variety of new locations. Our Ogre general has gone missing for the time being, so we’re pretty much just proxying his turns and avoiding combat. 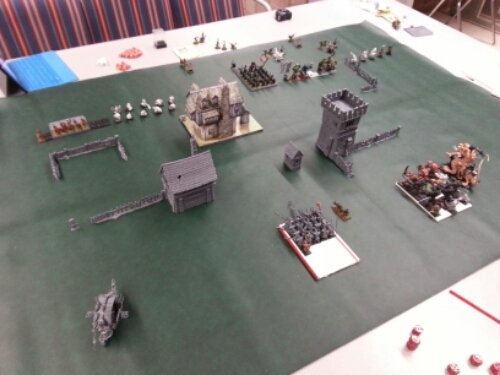 Check out that sweet portable battlefield 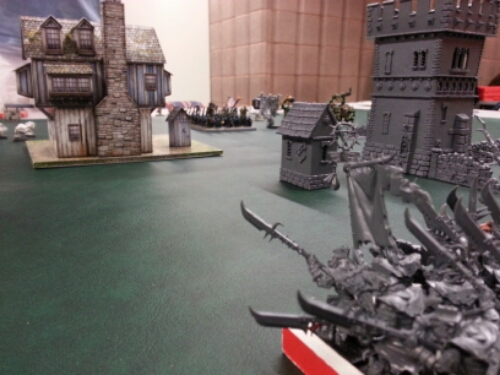 These poor vermin never managed to contact the enemy 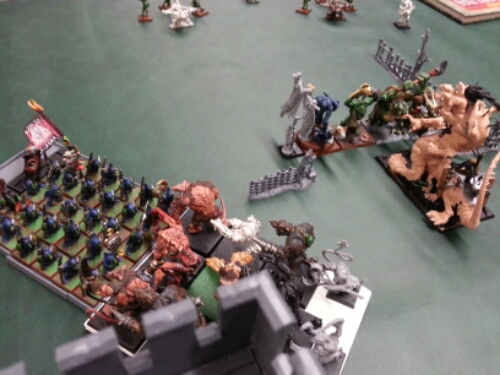 Pretty much my last push before we called it.